The Temples of Angkor – An Architectural Jewel of Cambodia

Situated between the Tonle Sap lake and the Kulen Mountains in Cambodia, Angkor contains the magnificent remains of several capitals of the Khmer Empire. Angkor served as the seat of the Khmer Empire, which flourished from approximately the 9th to 15th centuries. The hundreds of temples surviving today are but the sacred skeleton of the vast political, religious and social center of the ancient empire. At its zenith the city boasted a population of one million people, the largest preindustrial city in the world.

After the fall of the Khmer empire the Angkor temples were abandoned and reclaimed by the jungle for centuries. Situated amid dense rainforest and rice paddies, many of the temples at Angkor have now been restored and welcome over two million tourists each year. 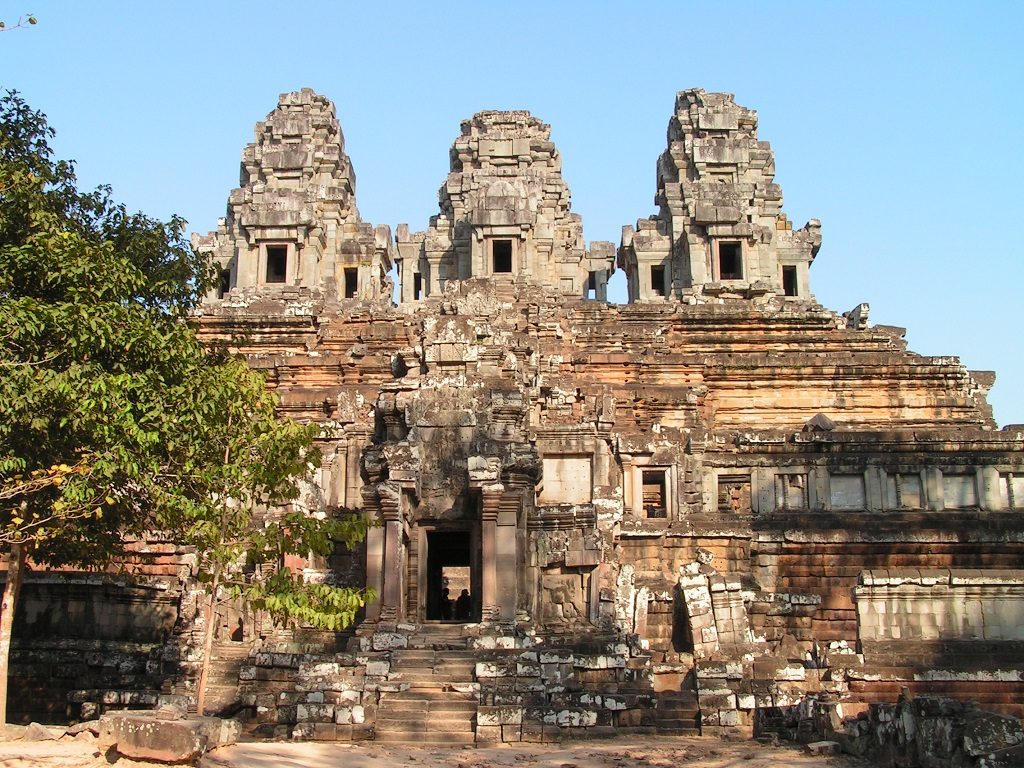 Little is known about this mysterious temple. It is presumed that Banteay Kdei was a Buddhist monastery as hundreds of Buddha statues have been excavated from the site. The temple was probably built in the 12th century, around the same time as the Ta Prohm temple. Known as ‘the citadel of cells’, its design is quite similar to Ta Prohm and Preah Khan, but less complex and smaller in scale. After the collapse of the Khmer empire it remained neglected and covered with vegetation for centuries.

With its three central spires, Pre Rup looks a bit like a mini Angkor Wat. Pre Rup was built as the state temple of king Rajendravarman in 961 and was dedicated to Shiva. It was the second temple built after the capital was returned to Angkor from Koh Ker after a period of political upheaval. Pre Rup is made of gray sandstone, which is a less durable material than the pink sandstone of some of the other temples at Angkor. As such, time and weather haven’t served the temple well and many of the complex carvings and details have been worn away by rain and erosion. It’s a crumbling temple but still magnificent in size and structure. 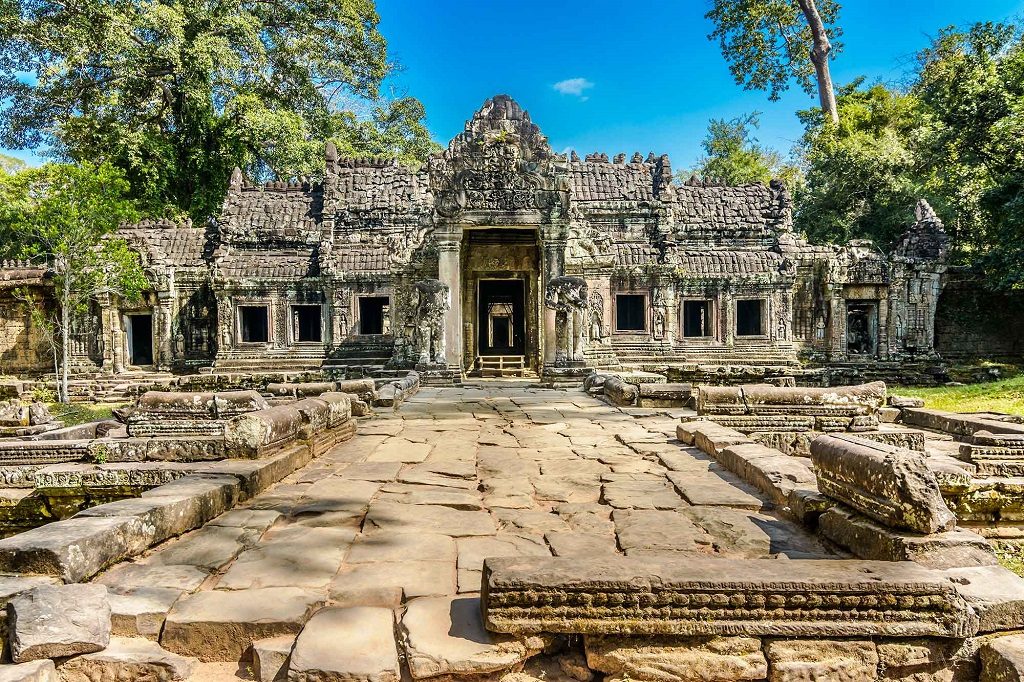 The temple of Preah Kahn is one of the largest complexes at Angkor. Like the nearby Ta Prohm temple, Preah Khan has been left largely unrestored, with numerous trees growing among the ruins. Preah Khan was built by king Jayavarman VII and probably served as his temporary residence while Angkor Thom was being built. The ultimate fusion temple, Preah Khan is both a Buddhist and Hindu temple. Four ceremonial walkways approach the gates of the temple. The eastern entrance is dedicated to Mahayana Buddhism with equal-sized doors. The other principal directions are dedicated to Shiva, Vishnu and Brahma with successively smaller doors, emphasizing the unequal nature of Hinduism.

Dedicated to Shiva, Phnom Bakheng is a Hindu temple in the form of a temple mountain. It was constructed at the end of the 9th century, more than two centuries before Angkor Wat , during the reign of King Yasovarman. Phnom Bakheng was the architectural centerpiece of a new capital, Yasodharapura. The temple faces east and is built in a pyramid form of six tiers. Upon its completion it boasted 108 small towers around the temple at ground level and on several tiers. Only a few of the towers now remain. Located on top of a hill, the temple is a very popular tourist spot for the magnificent sunset views.

Located far (about 32 km/20 miles) from the main group of temples, Banteay Srei is one of the smallest sites at Angkor. Due to its beautiful carvings however it is extremely popular with tourists and considered a jewel of Khmer art. Built of fine grained rose-pink sandstone, the temple walls are elaborately decorated with floral motifs and epic Ramayana scenes.

Construction of Banteay Srei began in AD 967 AD. It is the only major temple at Angkor not commissioned by a king but by a brahmin named Yajnavaraha. The temple was primarily dedicated to the Hindu god Śiva. Banteay Srei, the modern name of the temple, means “Citadel of the Women” as the elaborate carvings are supposedly to fine for the hand of a man. Its original name, Tribhuvanamaheśvara, means the “great lord of the threefold world”.

The last great capital of the Khmer empire, Angkor Thom (literally “Great City”) took monumental to a whole new level. It was built in part as a reaction to the surprise sacking of Angkor by the Chams. King Jayavarman VII decided that his empire would never again be vulnerable at home. Beyond the eight meter (26 ft) high walls is a massive moat that would have stooped all but the most determined invaders. The city wall has a sanctuary tower at each corner and five entry gates; one per cardinal direction plus an additional eastern portal, the Victory Gate. The gates each feature a tower topped by four huge faces, similar to those at the Bayon temple. The most fascinating way to enter Angkor Thom is through the south gate. The causeway here is flanked by 54 gods and 54 demons depicting parts of the popular Hindu legend “The Churning of the Ocean of Milk”. 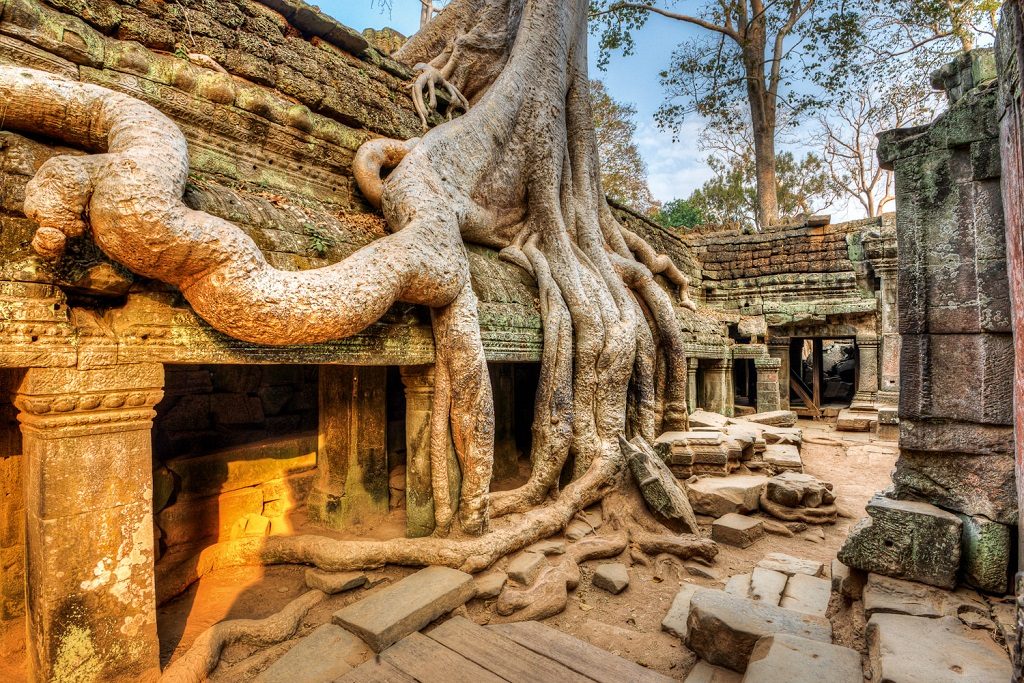 Ta Prohm is undoubtedly the most atmospheric and photogenic ruin at Angkor, with trees growing out of the ruins. Here you can still experience an India Jones moment and feel like an early explorer. If Angkor Wat and other temples are a testimony to the genius of the ancient Khmers, Ta Prohm equally reminds us of the awesome power of the jungle.

Built from 1186, Ta Prohm was a Buddhist temple dedicated to the mother of Jayavarman VII. It is one of the few temples in Angkor where an inscription provides information about the temple’s inhabitants. The temple was home to more than 12,500 people, including 18 high priests, while an additional 80,000 khmers, living in the surrounding villages, were required to maintain the temple. The inscription also notes that the temple contained gold, pearls and silks. After the fall of the Khmer empire in the 15th century, the temple was abandoned and swallowed up by the jungle

The Bayon temple features a sea of over 200 massive stone faces looking in all direction. The curious smiling faces, thought by many to be a portrait of king Jayavarman VII himself or a combination of him and Buddha, are an instantly recognizable image of Angkor. Built in the 12th century by King Jayavarman VII as part of a massive expansion of his capital Angkor Thom, the Bayon is built at the exact center of the royal city. The Bayon is the only state temple at Angkor built primarily as a Mahayana Buddhist shrine dedicated to the Buddha. Following Jayavarman’s death, it was modified by later Hindu and Theravada Buddhist kings in accordance with their own religious beliefs.

The Bayon temple rises through three levels to a height of around 43 meters (140 feet). The outer gallery on the first level depicts scenes from everyday life and historical events, while the inner gallery on the next higher level depicts mythical figures and stories. Some of the figures depicted are Siva, Vishnu, and Brahma. The third level is where you will encounter many of the famous faces (and tourists). 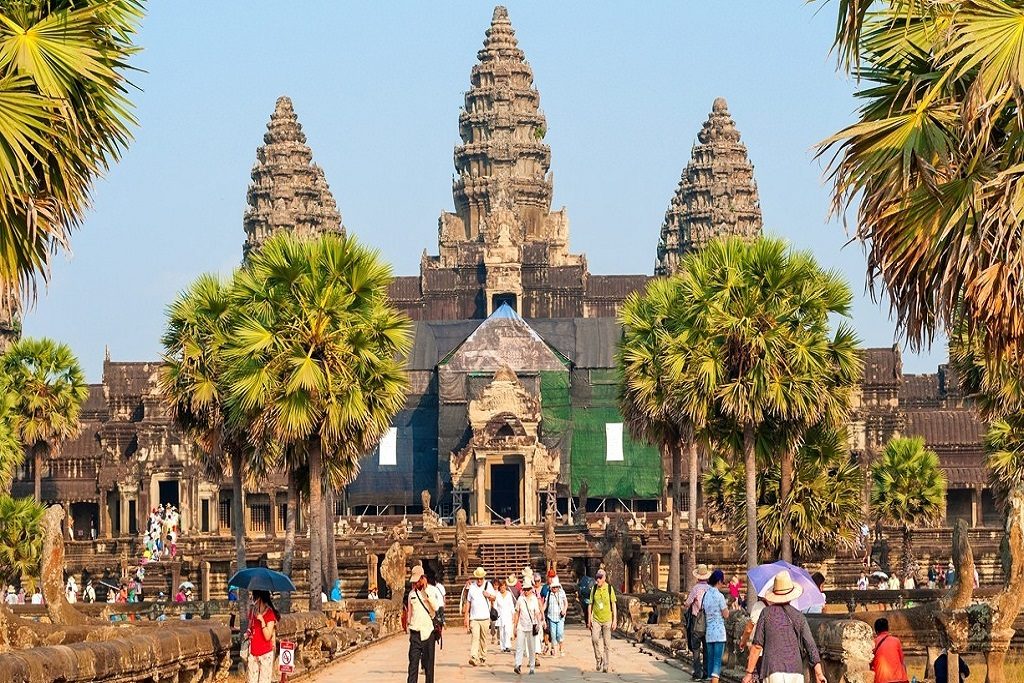 Angkor Wat (meaning “City Temple”) is the most magnificent and largest of all Angkor temples. The structure occupies and enormous site of nearly 200 hectares (494 acres). A huge rectangular reservoir surrounds the temple which rises up through a series of three rectangular terraces to the central shrine and tower at a height of 213 meters (669 feet). This arrangement reflects the traditional Khmer idea of the temple mountain, in which the temple represent Mount Meru, the home of the gods in Hinduism.

Built under the reign of king Suryavarman II in the first half of the 12 century, Angkor Wat is the pinnacle of Khmer architecture. The famous bas-reliefs encircling the temple on the first level depict Hindu epics including the mythical “Churning of the Ocean of Milk”, a legend in which Hindu deities stir vast oceans in order to extract the nectar of immortal life. The reliefs, including thousands of female dancers, are carved into the wall of the third enclosure of the temple.