The ancient town of Luang Prabang situated in northern Laos, was designated a UNESCO World Heritage Site in 1995. Considered by many travellers and writers as being the heart of Laotian culture, the tiny town is encircled by mountains and is 700 metres above sea level at the confluence of the Nam Khan and Mekong Rivers. Here visitors are subjected to an inflamed economic bubble that does not apply to the rest of the country. Being Laos’ premier tourist destination and (arguably) Southeast Asia’s most beautiful spot, ironically tourists will pay more for the innate pleasures of eating, drinking and sleeping than they would in the country’s capital city Vientiane. Luang Prabang was the ancient royal capital of the Lan Xang Kingdom until King Phothisarat moved the administrative seat to Vientiane in 1545.

Regardless, it has continued to overlook Vientiane as the destination of choice with its amalgamation of crumbling French architecture, glistening temples and extensive natural beauty. Even the hardest of hearts would have a struggle not to warm to the place. The town’s entire historical section is dedicated to tourism, with everything from former royal palaces to over 33 Wats (temples), on the tourist trail. This former Royal capital still remains the main centre for Buddhist learning in Laos and is the perfect location for spiritual contemplation. Cascading waterfalls, scaling peaks and the milky-brown waters of the Mekong River provide ample opportunity to swim, climb and sail your way through Luang Prabang. It is only as recent as 1989 that Laos opened up to tourism and the country that had previously been cut off from the rest of Southeast Asia developed a small but steady economy, based on tourism and regional trade. This small and gentle town where most locals are asleep by 22:00 is now one of the richest and most visited provinces in Laos. It’s one of the few places where you feel that this is the genuine article and one that retains its unique ambiance. 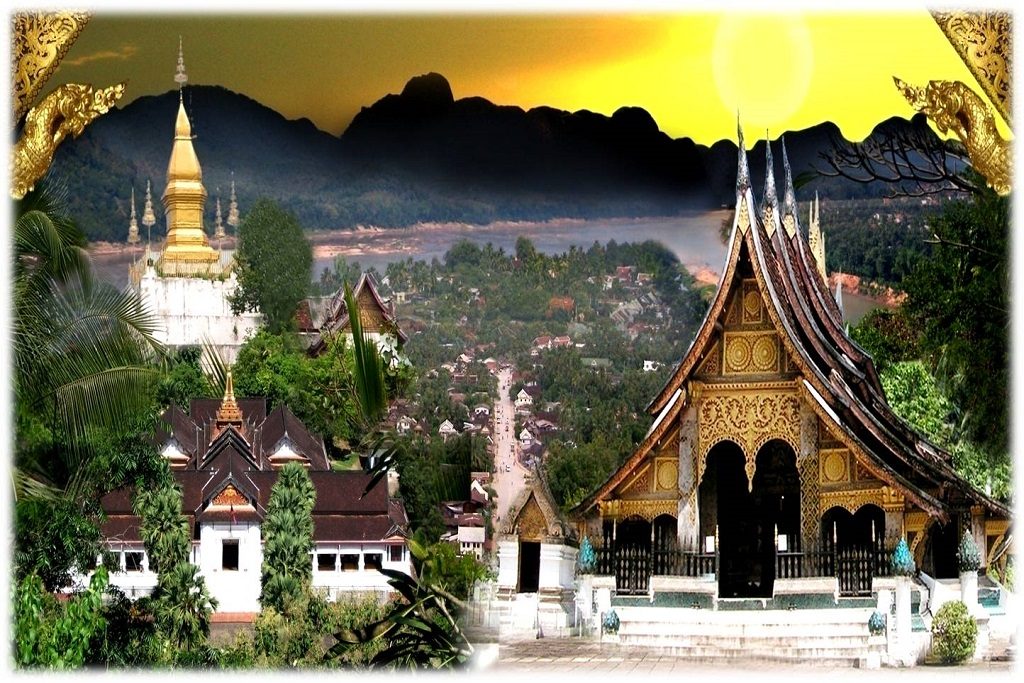 For reasons that are soon become apparent, Luang Prabang is often described as the ‘Jewel in Laos Crown’. Even though the town is well and truly on the tourist trail, it has nonetheless managed to preserve its natural splendor and inherent charm, exuding a missed-out-on-modernization vibe. The majority of the city’s sights can be reached on foot, so getting a map and making your way to the many temples (33 to be exact) is a good way to soak up the surroundings and observe the way of the Lao people, and the large monk community. The wonder of the ancient temples is apparent at first glance; the gentle and unassuming nature of the locals, given the chance, will also leave a lasting impression.

The UNESCO World Heritage City of Luang Prabang is the perfect place to see one of the most sacred Lao traditions, the Buddhist Alms Giving Ceremony. Despite being a highly revered ritual for locals, visitors are encouraged to be involved as long as a level of respect is maintained throughout. Alms giving takes place daily as the sun rises, beginning on the main street of Luang Prabang before spreading out to all the side streets. You should buy your offerings (usually food) in advance and arrive with plenty of time to spare as it’s considered very offensive to disrupt the ceremony once it has commenced. Follow the guidance of the locals by kneeling down ready to give your offering to the monks; most common gifts include rice, fresh fruit and traditional sweet snacks. The idea of the alms giving is for the Buddhist monks to make merit and also to collect food for their one meal of a day.

As the sun rises in Luang Prabang around 200 Buddhist monks depart from their various temples to gather their daily meal. The tradition of alms gathering dates back to the 14th century, yet still today locals wake early to prepare the food for the monks and wait quietly by the roadside to give their gifts. Although the main purpose is for locals to give alms to the monks, you will also notice small children kneeling with baskets in the hope that the monks will share some of their alms with them so that they can take food back to their family. This daily ceremony is both peaceful and spiritual and gives you a wonderful opportunity to experience an ancient Lao tradition. The procession is quite lengthy and therefore not suitable for very young children or those who cannot sit quietly for more than a few minutes. If you are taking photographs it is best to step back from the front of the line to avoid causing offence. If you are not making an offering maintain an appropriate distance and do not under any circumstances get in the way of those making an offering. Visitors should also remember to be there before the monks arrive and never ever to follow the procession.

Good to Know There are many unspoken rules regarding etiquette when attending an Alms Giving Ceremony, firstly shoulders, chests and legs must be covered in modest clothing as a mark of respect. You should also remain at a suitable distance from the monks and do not interrupt the procession under any circumstances. Therefore photographs may be taken, but from a distance and never use a camera flash. When seated, shoes and socks must be removed with your feet tucked underneath as you observe the ceremony in absolute silence. Female attendees must keep their head lower than the monks when giving alms and they must not talk to or touch the monks at any time, even when making an offering. Suitable offerings include some simple food which you can probably arrange at your hotel or buy from a local market en-route, if you buy alms on the street do not negotiate on price as this is also considered highly disrespectful.

Ban Phanom is a village steeped in traditional textile making with all families in the village working their looms to provide goods for sale at the night markets. The woven products were once supplied to the royal family and weavers today use the same techniques and patterns, resulting in a distinctly old-fashioned look. Cotton and silk materials with a range of coloured threads are intertwined to produce a shimmering effect whilst silk is added to create a pattern. Some of the families work from their own small workshops with the whole village operating as a co-operative supplying to a handful of manufacturers. Prices are open to negotiation and very affordable, you will need to bargain and expect not to pay the first price offered. In addition to shopping and enjoying a cultural experience, the area around Ban Phanom makes for a great place to take a bike ride and to explore some ancient remote temples

Close to the Phon Phau Temple, the village of Ban Phanom makes a popular tourist stop and is similar to the villages of Luang Namtha and Sam Neua as there you can observe the female textile makers at work on their looms, dyeing and then weaving. Years ago Ban Phanom was the village of choice for royal textiles, with each reigning monarch continuing to use village weavers as their preferred suppliers. The village itself is rich in history and offers a fantastic insight into an ancient art that is still very much alive today, thanks to tourism. Many sightseers visit the village, so it can get quite busy, especially when coaches arrive between 09:00 and 10:00, so avoid these times and you’ll probably experience a much more relaxed trip. If you’re interested in buying some textiles as a souvenir then it’s definitely worth visiting here instead of buying at the night market.

Close to the banks of the Nam Khan River, the Elephant Village Sanctuary (also known as the Elephant Park Project) works towards providing a peaceful future for rescued Lao elephants. Starting by saving the elephants from often brutal logging work, they are then given a home in the jungle where they can rest and recover. Some of the elephants at the sanctuary are disabled and are offered a chance of rehabilitation with an onsite fulltime vet to help those in need. The village is located in a lush river valley which is on a long government lease so long as the sanctuary opens its doors for tourists to see the programme. Excursions are offered through Tiger Trail Outdoor Adventures and include elephant riding and a mahout experience with anything from a half-day to a two-day tour. Whatever trip you book will go towards ensuring the existence of this sanctuary benefiting both animals and the 40 staff employed from the local villages that would otherwise be most likely without work.

The Elephant Village Sanctuary offers a once-in-a-lifetime experience to get really up close and personal with these magnificent creatures. A one-day mahout tour includes basic mahout training in how to control an elephant, a one-hour elephant ride through the jungle and also a trip to the Tad Sae waterfall located close by. This experience can be extended into two days with the additional opportunity to bathe ‘your’ elephant in the Nam Khan River plus an evening ride to take the elephant to their jungle home. There is also a full day elephant excursion which includes trekking the ‘Train of Falls’ – the natural mountain stream that provides the water to the Tad Sae Waterfall. If you’re feeling more energetic you can also combine your trip with a bike ride where you cycle from a forest temple through villages to the sanctuary before stopping by the waterfall, or with three hours kayaking downstream following your elephant ride. All tour programmes include lunch and refreshments plus accommodation where applicable. 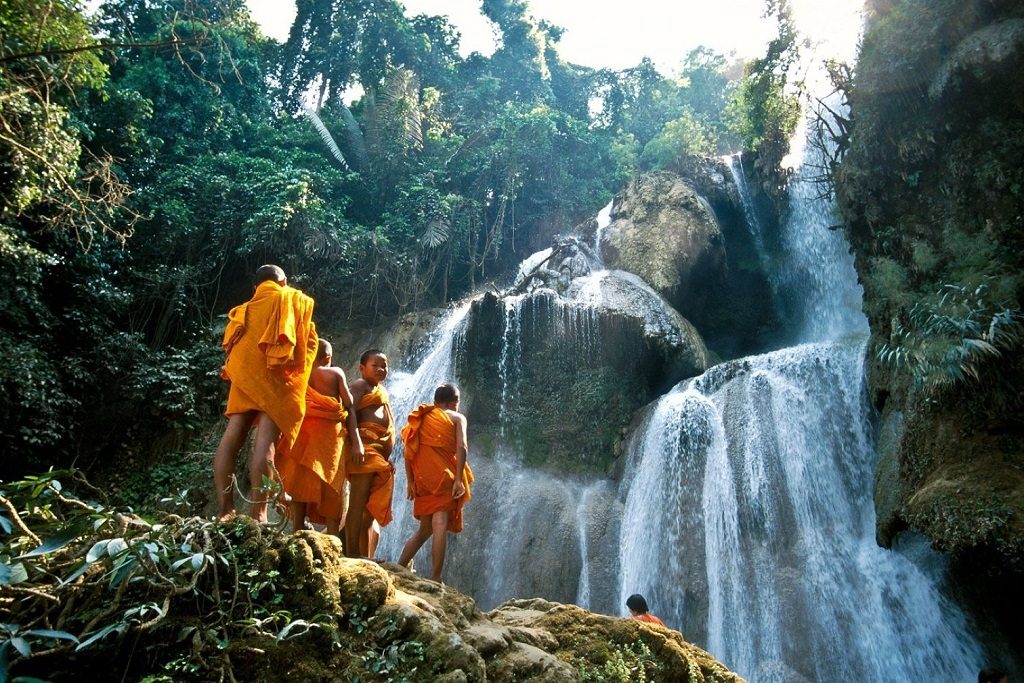 Kuang Si (Xi) Waterfall is the biggest in the Luang Prabang area with three tiers leading to a 50-metre drop into spectacular azure pools before flowing downstream. The pools also make great swimming holes and are very popular with both tourists and locals. You can change clothes for swimming at the wooden huts located close to the entrance. The pools also have cascades of up to five metres high with deliciously cold water due to the shade given by the surrounding lush tropical jungle, if you don’t fancy a swim then you can relax in the shade and watch others having fun jumping in and out of the water. There are trails allowing you to climb up to the top where you can see the stream feeding into the falls and enjoy some more natural pools. Remember to bring the correct footwear as the trails can get slippery and are certainly not recommended for children or the frail. 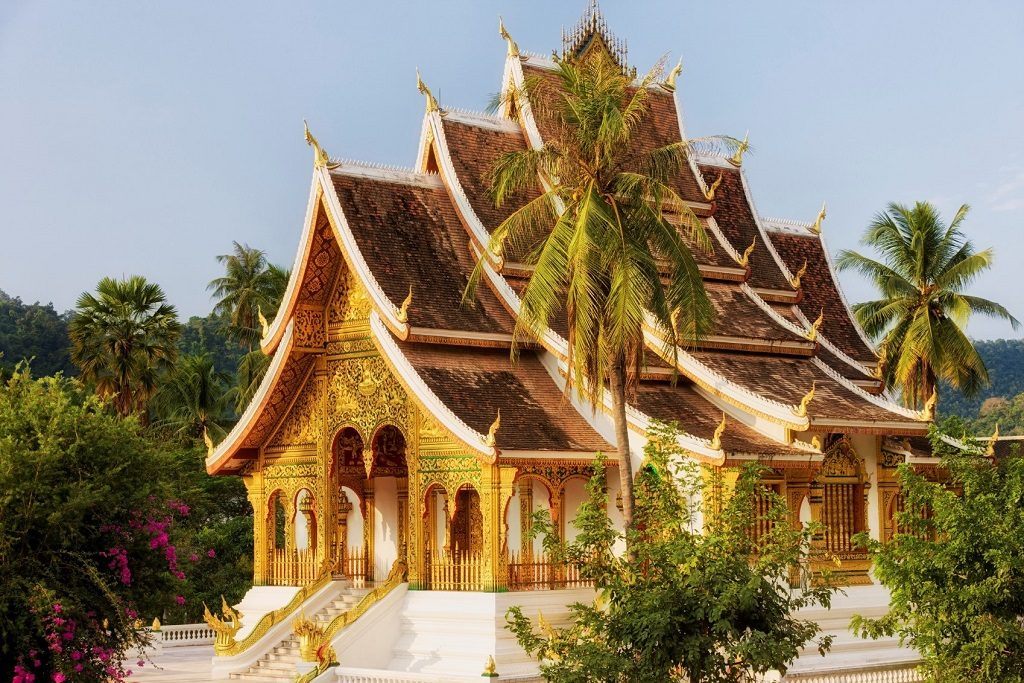 Set in a spacious, well-tended garden just off one of Luang Prabang’s main boulevards (Thanon Sisavangvong), you will find the fascinating Royal Palace Museum, which is also known as Haw Kham. The museum is well worth a couple of hours of your time if you want to learn more about Lao history and culture. Although the current main building dates from the early 20th century, the exhibits stretches back several centuries to trace the turbulent past of the Lane Xang kingdom and the colonial era, through to the present day. Originally the residence of the king, the museum was designed in the French Beaux-Arts style, with many tasteful accents of traditional Lao culture. When the communists came to power in 1975, they took over the palace and sent the royal family to re-education camps. The palace was converted into a museum that was opened to the public in 1995 after careful renovation, and remains in good condition. The grounds contain a number of other buildings including a new exhibition hall and a chapel (Haw Prabang), and a statue of King Sisavangvong. You can take excellent photos of the museum compound from the Mount Phousi steps that descend to Thanon Sisavangvong.

Discover our tours in Laos here.