Cao Bang situated in the Northeast of Vietnam is the land of rich revolutionary traditions of Vietnamese people. The province marks resounding victories of the people of Vietnam. Every place, every forest, every road here seems associated with the development of Vietnam’s revolutionary history and the life  of President Ho Chi Minh in the early stages of the war.
The province has borders with Ha Giang, Tuyen Quang, Bac Kan, and Lang Son provinces. It also has common international border with Guangxi province -China. The province covers an area of 6.690,72 square kilometres, and its population was 507.183 peoples (according to statistic in 2009).

Cao Bang is the land of a long revolutionary tradition and the original place of Vietnam’s revolution.  In the 224 historic sites and landscapes, 23 were rated at national level and 6 at local level. Typically, the historical area of Pac Bo, Kim Dong historical relic includes his tomb and a spacious monument at the bottom of a high and massive stone mountain range; Tran Hung Dao Forest was listed in the nationally significant historic landmarks at the end of 2013; There are also famous historical relics such as Dong Khe Victory and historical and cultural heritages such as Sam Temple in honour of  Nung Chi Cao, King Le Temple in honour of King Le Thai To, ect… 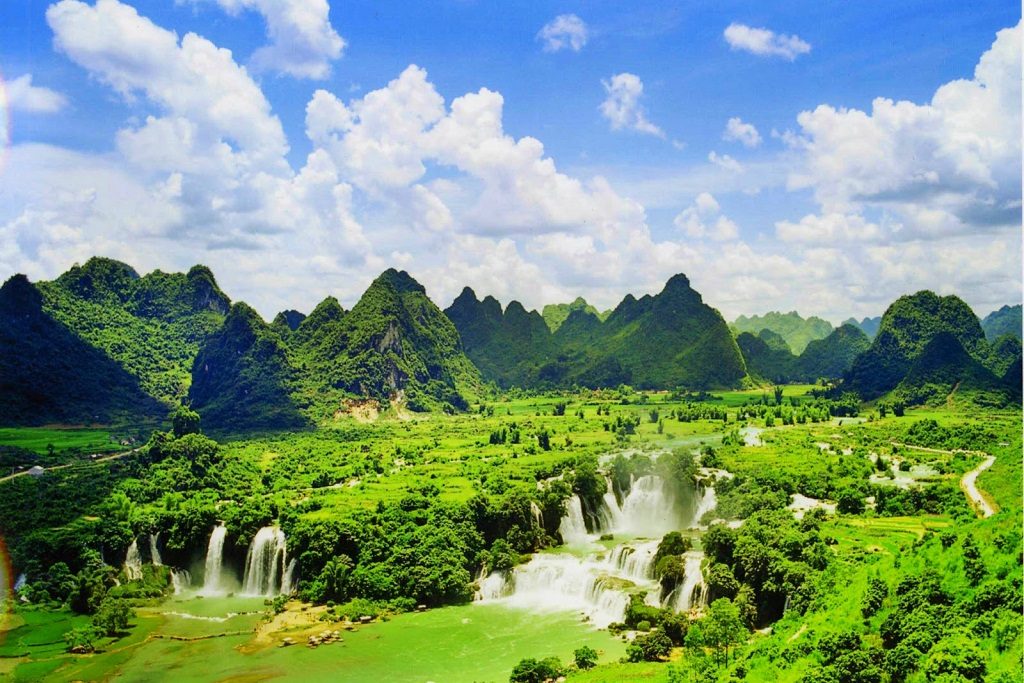 Cao Bang is endowed with many natural masterpieces such as Nguom Ngao Cave, Ban Gioc Fall, Thang Hen Lake, Khuoi Lai Lake, Phja Oac – Phja Den ecotourism destinations. Visitors to Cao Bang will be involved in many unique traditional festivals of the peoples annually and admire the beauty of the traditional villages.
After identifying strengths and potentials of tourism in Cao Bang, the Provincial Party Committee developed the Tourism Development Programs such as development programs in key tourism areas; Tourism Development Program 2011-2015.

This waterfall is the largest and most beautiful waterfall in Vietnam. The falls are located in Cao Bang province and easily reached by travellers based in the capital city of Hanoi on the package holidays to Vietnam. The actual falls are 300 metres across and 30 metres high to make a truly impressive sight.

The falls are found in the beautiful jade-blue waters of the Quay Son River, which forms the border between Vietnam and China and surrounded by limestone pinnacles, bamboo groves and rice fields. Accordingly, the waterfalls are located half in China and half in Vietnam. Both sides of the border hire out the bamboo rafts to let visitors get closer to the fall and really appreciate the cascading waters.

The river and its water are typically high enough year-round to make a trip to Ban Gioc waterfall perfect whenever you are in the country. But, the volume of water is certain to change with the arrival of the rainy season. The best time to visit the fall is between May-September when the water is flowing at its best and the falls look amazing.

Getting there from Hanoi

Ban Gioc Waterfall is about 350 km from Hanoi, but the time and effort to visit this beautiful waterfall on the Vietnam family holiday is certain to be worth it.  The bus travel route is via highway 3 to Cao Bang City (approx 8 hours journey time), and then along a few provincial roads in good condition that pass some great scenery in the countryside until arriving at the falls. It is relatively easy to get to the falls at Ban Gioc, but the number of foreign travellers to the region is still quite low.

The falls are a wonderful destination for tourists on the motorbike tour of northern Vietnam, or other travellers that are simply in search of the more off the beaten track attractions to explore in the country.

If travelling by motorbike and planning on a leisurely pace to take in the stunning scenery, there is the option to split the journey over two days and stay overnight in a hotel in Bac Can, and continue the ride the next day. On the motorbike tour it is important to prepare the luggage carefully and pack spare tires, repair tools, etc. Also, make sure to fill the petrol tank before leaving town because there will be limited petrol stations after reaching the mountains and forests.

Alternatively, there is the option to hire a car and driver in Hanoi to drive to the region, which gives a very convenient and comfortable trip. It is best to start the journey early in the morning with the intention of arriving in the afternoon. On the trip to Ban Gioc Waterfall it may benefit to stop at Trung Khanh town which is on the travel route to organise overnight accommodation before continuing the journey.

For travellers that prefer to avoid staying overnight in the region after visiting the falls, there is the option to book a seat on a sleeper bus, which leaves late in the evening and arrives by early morning the following day.

Also, Hanoi Noi Bai International Airport accepts regular flights from around the country and is within a 10 hour bus journey from the waterfalls.

There isn’t much in the way of hotels in the region, but there are several private hostels in the area of Ban Gioc Waterfall. However, the majority of travellers on the Vietnam tours will visit the falls for the day, and then return to the main town at Cao Bang to spend the night.

For travellers returning to Cao Bang for the night there are more options available in relation to accommodation. There are several motels and hostels in town with the motels starting at approx. $8.50 per night, and the hotels, such as Giao Te hotel, Bang Giang hotel, and Thanh Loan hotel starting at $17.50- $22.50 per night.

If you want to stay at Ban Gioc, Saigon Ban Gioc is just 500m from the falls, which is the best hotel in the area and you will have plenty of time taking photos, swimming, etc…

Things to do on Ban Gioc Waterfall trip

While Ban Gioc Waterfall is the most beautiful waterfall in Vietnam and the main highlight of the tour, there are several other attractions that are worth seeing in the Cao Bang region. A travel itinerary to the region can include checking out the beautiful Ma Phuc mountain pass, Thang Hen Lake, rice fields along the route, and Nguom Ngao cave.

The local mountainous landscape is extremely beautiful with the slowly flowing blue river, or the curved Ma Phuc Pass that crosses over the mountains and rated as one of the most striking mountain passes in the north of the country.

The Nguom Ngao cave is located within a short distance of the falls and at 3 km in length is a very beautiful cave to explore in Vietnam. Along with the interesting caves, rivers and mountains, Ban Gioc falls can make a very interesting and exciting tourist attraction that is easily enjoyed by the entire family.

For travellers with a little extra time to spare on the Vietnam tours package, say 3 or 4 days, the trip to Ban Gioc Waterfall can be combined with travelling to Ba Be Lake to make a wonderful circular trip and will incorporate all the major attractions in Cao Bang. This tour gives a perfect opportunity to discover the Nguon Ngao and Hua Ma caves which are among the most striking and beautiful in the north of the country, while also soaking up the daily life and witnessing the unique cultures of the local ethnic minorities of Nung and Tay. Also, there are plenty of local speciality meals to try while travelling in the region. On arrival at Ba Be Lake, a boat trip is the best way to appreciate this large freshwater lake that is really peaceful and located in a limestone area.