Vientiane delivers a relaxing riverside break where one of the best things you can do is grab a drink and enjoy the sun’s spectacular show as it sets over the Mekong. Despite being the largest city in Laos and the hub of commerce and administration, Vientiane is still refreshingly laid back. The city offers a great choice of accommodation, restaurants and pavement cafes some adding a French air with their style of architecture which contrasts pleasingly with the old Buddhist temples dotted around.

There are plenty of things to do after dark and bars cater to all tastes from backpacker beer haunts to elegant cocktail lounges. Navigating Vientiane is relatively simple due to its size and sightseeing can be done either on foot, by bike or by hiring a song-teow. The countryside is never far away, with rice paddies providing a backdrop to most streets. Culture buffs should make the Laos National Museum their first stop. When in Laos, do as the Laos do and the slow the pace right down. A common joke is that acronym PDF (Peoples Democratic Republic) actually stands for ‘Please Slow Down’. A word of warning to the anally punctual, the country is decidedly laid back and some visitors may mistake this for a lack of ambition or impolitesse but regardless, it’s best not to expect things to run like clockwork.

Vientiane is known for its laidback atmosphere, and its list of quaint, uncrowded, yet on the whole impressive attractions reflects this fact. Age old Buddhist temples are scattered throughout, while quirky riverside markets sit next to interesting cultural sites and colonial French architecture. Love it or hate it, life moves slowly here – but that gives visitors more time to enjoy the small everyday events that you might miss in the bustle of a bigger city. Grab your camera and hit the streets; you’ll feel like a local in no time!

Our list of Top Ten Attractions in Vientiane demonstrates exactly why you might find yourself booking a couple of extra nights in this often overlooked capital city. From the stunning golden ‘That Luang’ stupa, to the vibrant Night Market, if you delve deep enough there’s a wealth of interesting things to do and see in this picturesque Mekong riverside spot.

Buddha Park (aka Xieng Khuan) is a famous sculpture park with more than 200 religious statues including a huge 40-metre high reclining Buddha image. The best spot for photography here is on top of the giant pumpkin structure standing about three stories high. The entrance is crafted to look like a demon’s mouth (about three metres high) with a stone ladder inside leading to a bird’s eye view of the entire Xieng Kuan Park.

it was built in 1958 by Luang Pu Bunleua Sulilat, a monk who studied both Buddhism and Hinduism. This explains why his park is full not only of Buddha images but also of Hindu gods as well as demons and animals from both beliefs. The most outstanding ones include Indra, the king of Hindu gods riding the three-headed elephant (aka Erawan and Airavata), a four-armed deity sitting on a horse and an artistic deity with 12 faces and many hands, each holding interesting objects. They are all equally impressive not only because of their enormous size but because they are full of interesting details and interesting motifs.

There is a local eatery and café offering food and drinks to tourists at one end of the park right next to the Mekong River that makes a great spot to chill after all the walking and climbing. Among the popular snacks are papaya salad, fried bananas and cold Lao beer. It also has a souvenir shop and restrooms. There is a small fee for entering the park as well as for photography. 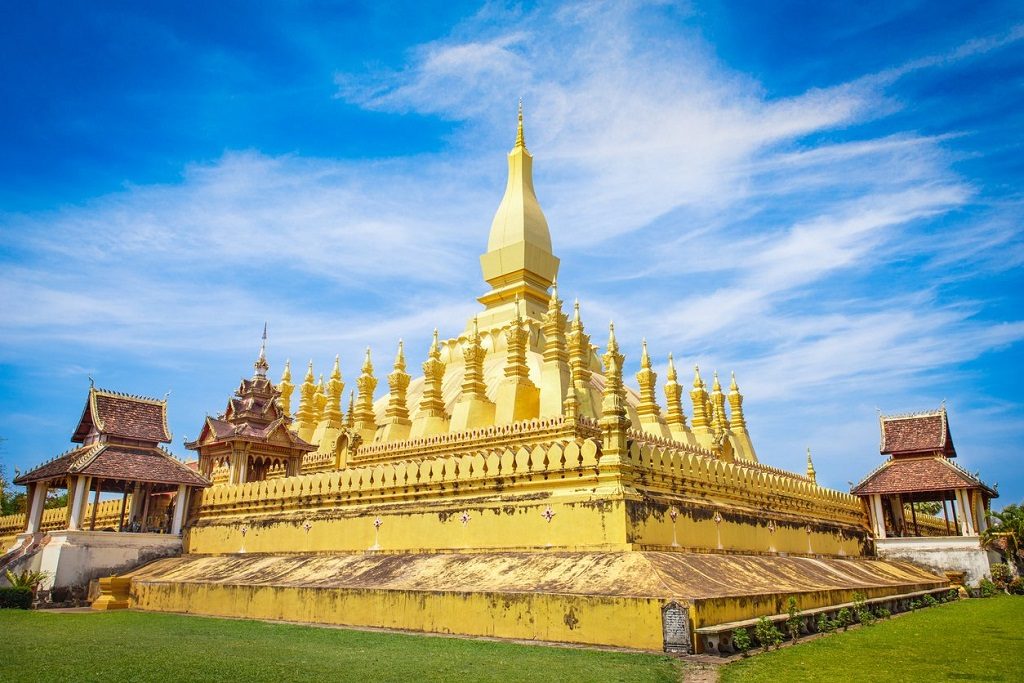 That Luang, or the Great Stupa, in Vientiane is a national symbol (it’s image is on Laos’ official seal) and also the most sacred monument in the country. From the outside That Luang looks more like a fortress surrounded by high walls and it features two temples with the main stupa, the top of which is covered with gold leaf, standing 148 feet tall. The beautiful architecture is in Lao style, influenced by Buddhist beliefs – these include finely-gilded, red-lacquer doors, pointed lesser stupas, many Buddha images and beautiful flower and animal images.

Locals say that it was originally built as early as the third century to house a breastbone of the Lord Buddha brought to Laos by an Indian missionary. However, the current structure was built by King Setthathirat in 1566 on the site of a 13th century Khmer ruin. He named Vientiane the capital after Luang Prabang in the mid-sixteenth century. An elegantly crafted statue of him stands in front of the main entrance to That Luang. That Luang was greatly damaged by the Burmese, Chinese and Siamese during invasions in the 18th and 19th centuries then was basically left alone until French colonial times. Restoration work was completed in 1900 by the French and for a second time in 1930, again with the help of the French.

Every November when the Boun That Luang Festival is held in Vientiane, a large crowd of followers and tourists come to town from all over Laos and neighbouring countries. The festival is considered the most important Buddhist celebration in Laos with many activities going on for three days and three nights. The main event is always held at That Luang and thousands of people come to pay respect to the stupa and to enjoy the colourful event that includes parades, live music and religious ceremonies. 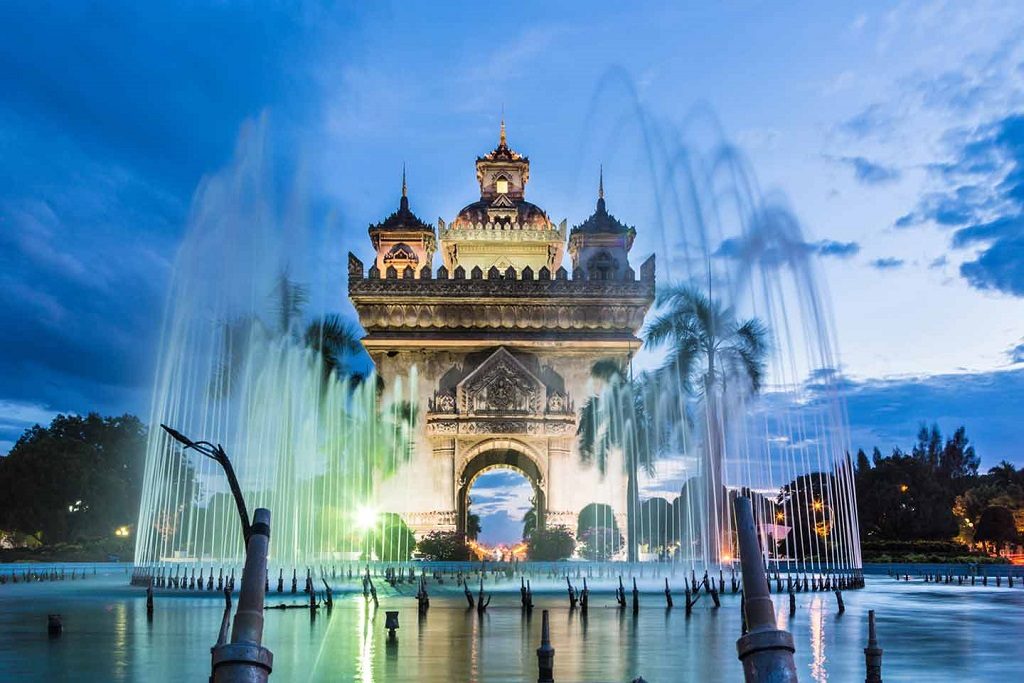 With its crenellated upper level topped with five ornate towers in the traditional Laos style, the Patuxai Victory Monument cuts a distinctive figure on the Vientiane skyline. It forms the centrepiece of Patuxai Park, and is dedicated to the Laos who were killed in the fight to gain independence from France, as well as from the nation’s earlier occupiers, Siam and Japan. Situated at the end of one of the capital’s grand avenues, the large, square arch is reminiscent of the Arc de Triomphe in Paris. However, as a monument to Laos’ resilience and eventual independence, Patuxai was designed to pay homage to its national culture and traditions. Its exterior embellishments feature both Buddhist religious symbols such as lotus leaves and the stupa-shaped towers, and statues of animist kinnari (half-female and half-bird figures) and nagas (dragons). The interior of the monument is also richly decorated with painted walls and ceilings depicting gods, goddesses and elephants. For a small fee, you can climb to the top to enjoy the panoramic view of the charming, old-fashioned city of Vientiane with its many trees, low-rise buildings and temples, and all the way across the Mekong River to Thailand.

Patuxai was built between 1957 and 1968 using funds from the U.S. government.It is sometimes nicknamed the ‘vertical runway’ as the cement used was intended for the construction of a new airport. The name comes from the Sanskrit words for door or gate (patu) and victory (jaya).Patuxai features four arches, facing North, South, East and West. The four corner towers and fifth central tower that crown the arch symbolise the five Buddhist principles of thoughtful amiability, flexibility, honesty, honour and prosperity.

The seven floors of the monument contain administrative offices as well as a gift shop, a museum and the upper viewing galleries. Patuxai Park is a popular place to stroll around in the afternoons among the palm trees and lotus ponds. There is also a musical fountain that was donated by China. The peace gong at the northern end of the park was presented to Laos by Indonesia in recognition of Laos being named the world’s most peaceful country. For an entrance fee of 3,000 Kip (38 US cents) you can take the stairs or the new lifts to the top floor viewing area. 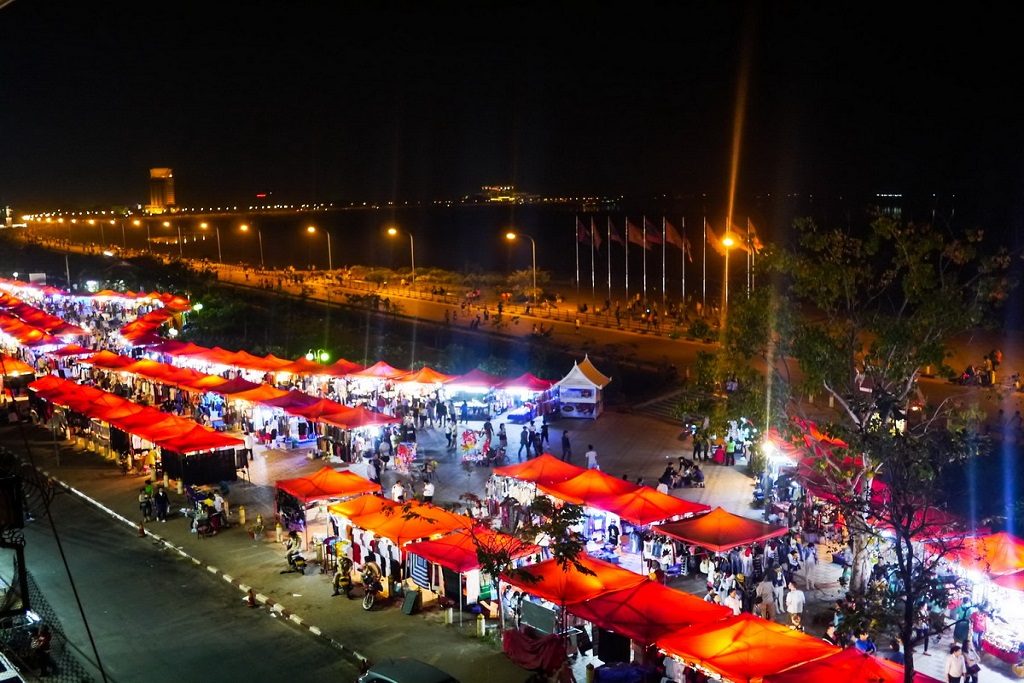 The Vientiane Night Market is aimed primarily towards tourists, with clean, orderly stalls, and all manner of merchandise that make great souvenirs or mementos. It all begins around sunset when a small army of sellers begin setting up their red-roofed stalls directly on the riverside promenade. You can’t fail to see it. The whole riverside area is alive at this time with joggers and dog-walkers taking advantage of the cooling breezes and stunning backdrop of the sun lazily sinking into the Mekong river.

Products on offer are fairly typical of night markets throughout the region. You will find a predictable array of Buddhist-inspired paintings and knickknacks, cheap sunglasses, and Beer Lao T-shirts. The clothes stalls tend to be geared towards the backpacker market with fishermen pants and one-size-fits-all dresses and skirts. With only $US10 in your pocket you can pick up at least a couple of products here, but, for bargain hunters, it’s worth mentioning that everything on offer here can be found at a slightly cheaper price at other markets. The traders seem to have whittled down all the best-sellers from the Morning Market and set them up in more attractive, and convenient, surroundings. 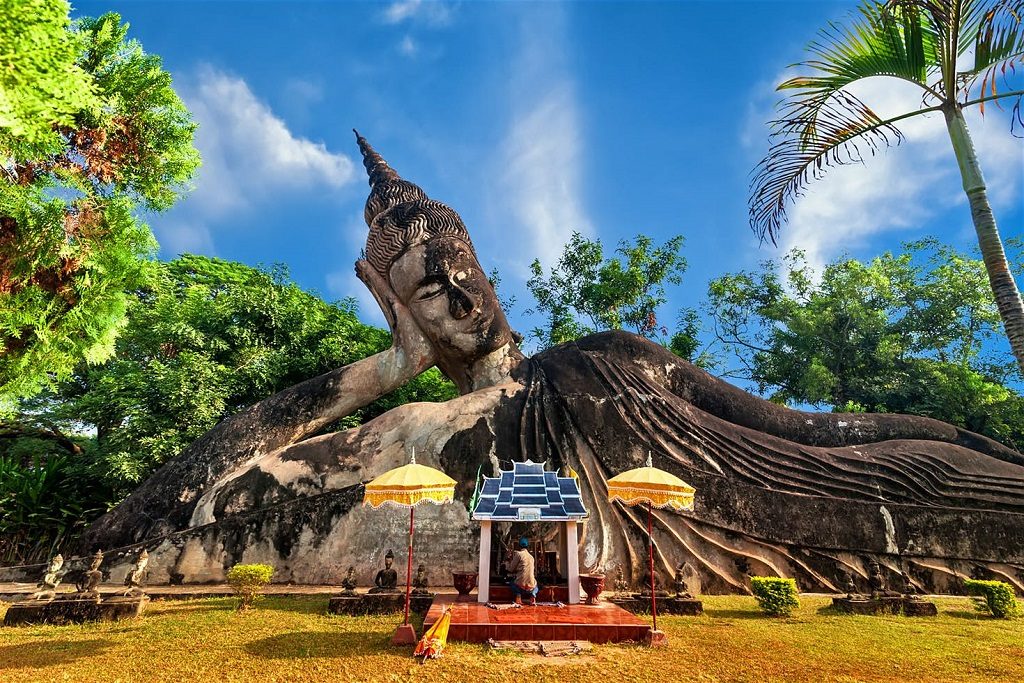 Vientiane boasts several beautiful temples or wats, but one of the most impressive and interesting of them is Wat Ho Phra Keo. It was originally constructed in 1565 as the Lao royal family’s personal chapel, and as a home for the Emerald Buddha after it was snatched from northern Siam (Thailand). This sacred jade statue was reclaimed by the Siamese in 1778 and now sits in Wat Phra Kaew in Bangkok. Even without the Emerald Buddha, however, Ho Phra Keo is well worth a visit. The only part of the old royal palace that has survived, the temple is no longer used for religious purposes and is now a museum.

The Temple of the Emerald Buddha, as it is often known in English, is richly adorned with carved wooden features, a magnificent 16th century lacquered door with Hindu carvings, numerous Khmer stone carvings and a variety of Buddha statues. The stone balustrade of each of the temple stairs features a dragon with its head facing the grounds, guarding the sacred building. The shady, well-kept garden is an oasis of calm that offers a welcome respite from the sun and a quiet place to meditate or simply rest.

The name Ho Phra Keo means “Altar of the Emerald Buddha”, in reference to the fact that only the altar remained when the statue was removed . It is also sometimes spelled Haw Phra Keow, Ho Prakeo or Ho Phra Kaew. English-language guidebooks often refer to it as the Temple of the Emerald Buddha.

The temple was first built on the grounds of the royal palace in 1565, but was destroyed in the Siamese invasion of 1828-29. Prince Souvanna Phouma, an engineer and future prime minister of Laos, directed the reconstruction of Wat Ho Phra Keo between 1936 and 1942. Although it is relatively new, the Bangkok-rococo style structure has a distinctly traditional look. On its veranda you will see some of the finest examples of Buddhist sculpture in Laos. The interior of the temple is now a museum that houses many Lao treasures such as a gilded throne, Khmer Buddhist stone tablets, wooden carvings, bronze frog drums and palm-leaf manuscripts.

The entrance fee is less than a dollar. The neatly tended garden contains colourful flowers, lush green lawns and charming statues set among the shady trees. 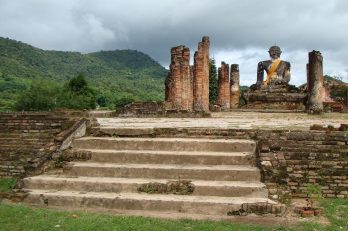 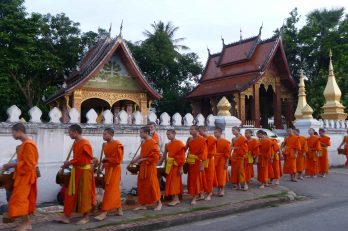